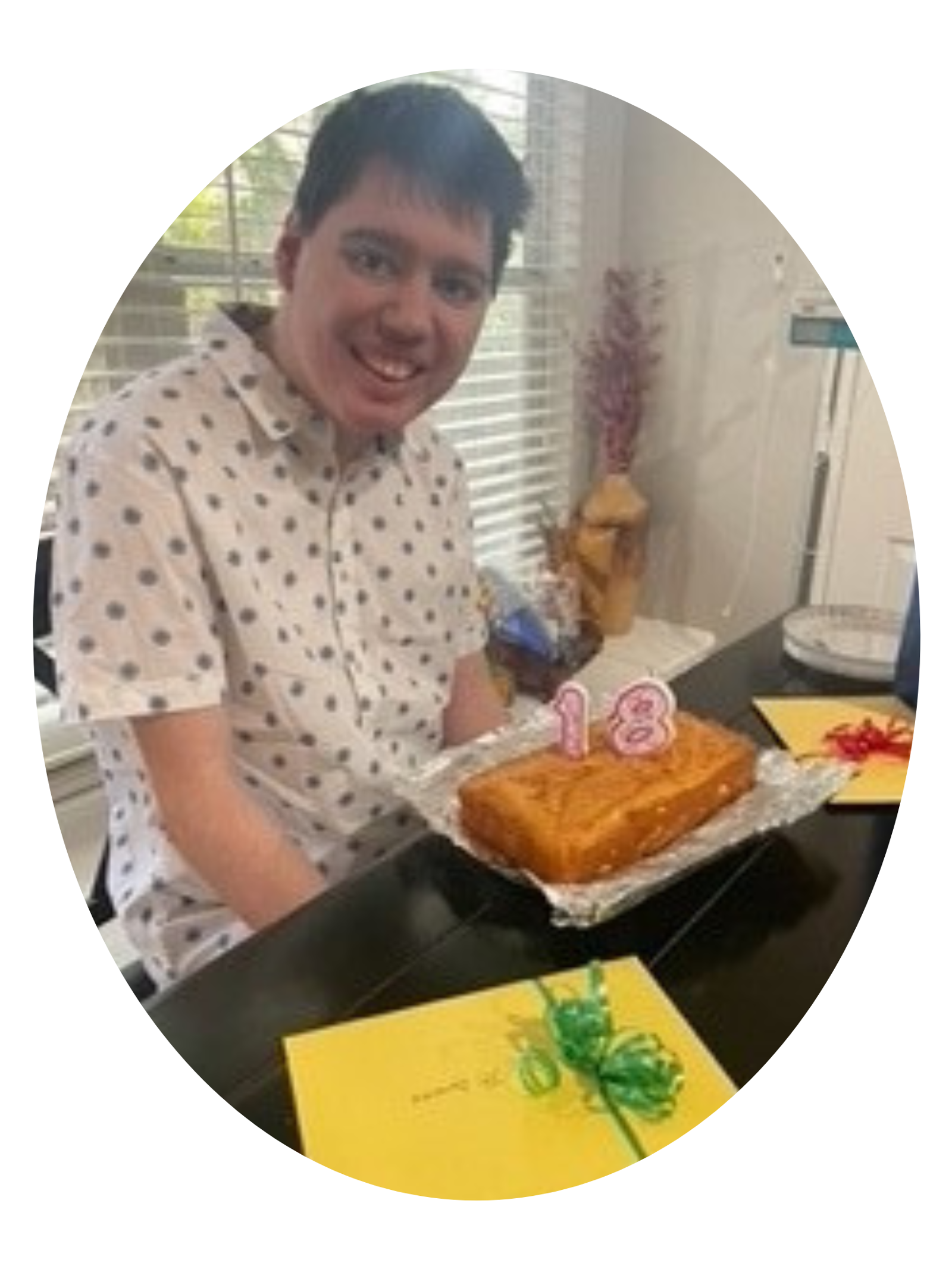 We were ushered into a family sitting room outside the neonatal intensive care unit to await the pediatric neurologist. Life, certainly, would change after that fateful meeting. “Your son may not walk, talk or see,” we thought we heard the doctor say. There’s a surreal feeling when a new parent hears those words. Then…a disbelieving thought: “Did I hear him right?”

Duncan had suffered a brain infarction – a stroke – within seven days of his birth. This resulted in diagnoses of cerebral palsy, cortical blindness, intractable epilepsy, and developmental delay. Despite literally hundreds of tests, Texas Children’s Hospital (TCH) experts were never able to determine its cause. And the doctor says time would tell how well he would function.

So, we moved into survival mode, and Duncan came home 10 days later. Our family began living one day at a time with a newborn with serious medical issues. That newborn grew into the handsome 19-year-old we know today - with a melt-your-heart smile, wise eyes, and enviable brunette-colored hair. With God’s help inspiring our large care team, today, Duncan walks, talks and sees.

Easter Seals has played a critical role in our family’s life these past two decades. From the Parents’ Night Out program that provided respite for his mom and dad to the amazing summer camp programming that Duncan adored, the organization has come through for us time and time again.

Now, Duncan is in his third year at The Caroline School and is thriving thanks to the dedication of director Tabitha Hernandez and wonderful teachers and assistants. His on-site therapists Alysia Cummings, Melissa Dafler, and Daryn Ofczarzak are intensely committed to his progress and collaborate closely with us. Life for our precious boy and our family isn’t easy: he has major tone and gait issues, executive functioning difficulty, and speech challenges. And each of our care team is focused on doing all they can for a prosperous life. We thank God each and every day for them!  - Catherine Burch Graham (“Mom”) 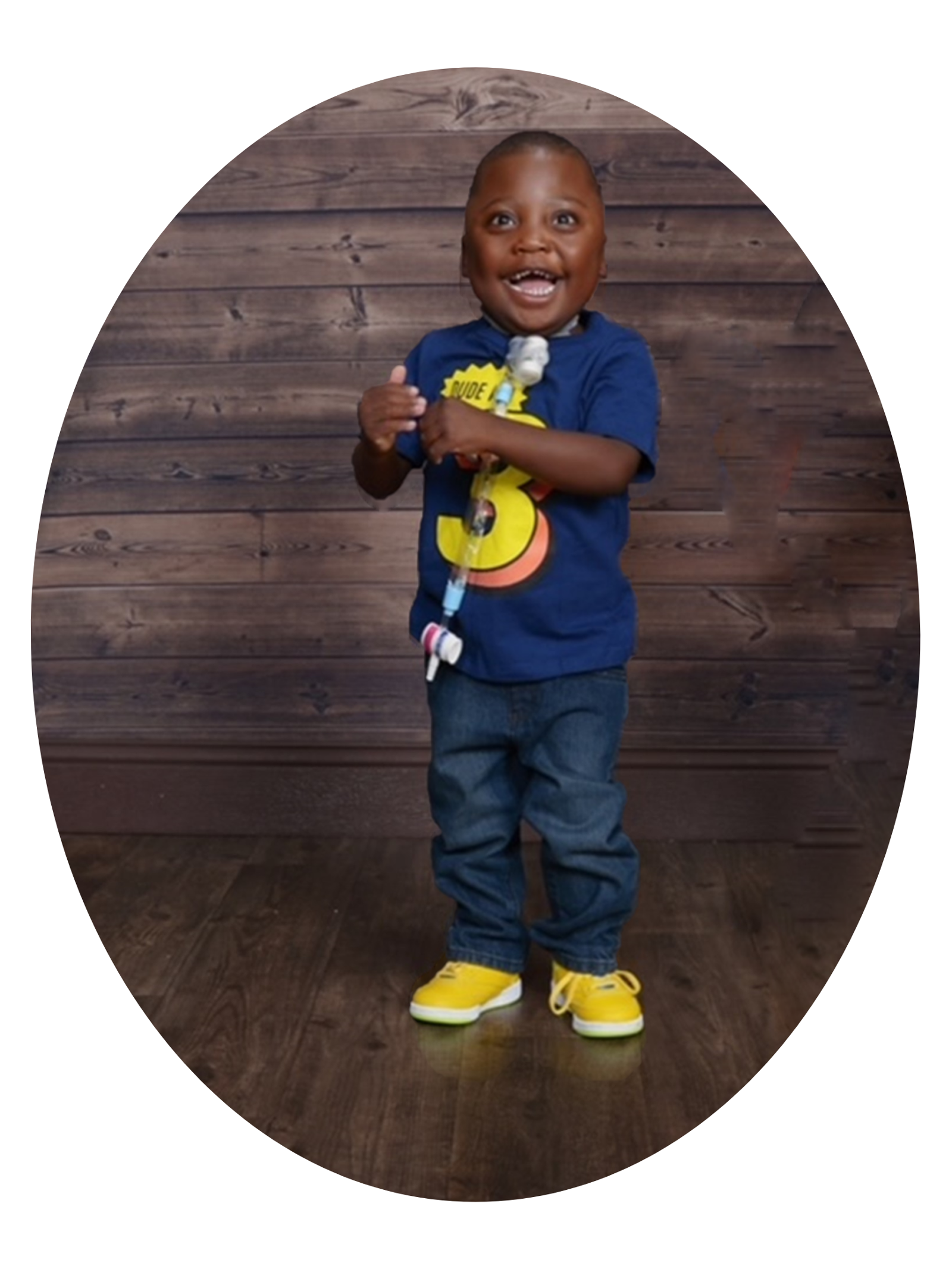 Ethan was born extremely pre-term at 25 weeks gestation on November 15, 2018 weighing only 640 grams. Due to his immature organs, Ethan experienced many episodes of chronic respiratory failure, pulmonary hypertension, anemia, brain bleeds, and failure to thrive. He suffered from a rare development of pneumatoceles of both lungs at 11 days old, and spends the next six months under close observation in El Paso Children’s Hospital NICU.

With an overwhelmingly long list of diagnoses, he was at risk for sepsis and developed ventilator-associated pneumonia. Ethan’s biggest hurdle was overcoming Pneumatoceles and Bronchopulmonary Dysplasia, which required a tracheostomy for severe airway obstruction. He underwent a life-changing surgery for his trachea and g-tube at four months old.

While recovering from his first of many surgeries, Ethan became critically ill May 24, 2019, and was abruptly transferred to Texas Children’s Hospital PICU. His unstable condition warranted the need for a 6-months long medically induced coma to regain stability and lung maturation.  As he battled for his life and showcased his strength, multiple measures were taken to ensure the healing process progressed. After a tumultuous 439 days, he was officially discharged in January 2020 to recover from home and embrace a world he had not yet seen.

While adapting to a new environment, with his ventilator, oxygen, and feeding tube in tow, Ethan continued to face challenges. After a silent seizure and a 24-hr hospital observation, further diagnostic testing revealed Ethan suffered from transient seizures, cerebral palsy, developmental delay, and a plethora of diagnoses related to his extensive medical history. Despite many challenges and setbacks, Ethan has not been hospitalized apart from scheduled procedures and wellness checks. Ethan came home at 15 months old, on the brink of a global pandemic, thriving but developmentally comparable to newborn with poor mobility and motor skills. To combat these deficiencies, in-home therapy was utilized extensively. As the world adjusted to a new normal, Ethan transitioned to the Houston Easter Seals Occupational, Physical, and Speech Trio of therapists, and his journey skyrocketed from there.

The Houston Easter Seals’ engagement and passion for their work was evident from how the staff instantly connected with Ethan. His joyous spirit and contagious smile illuminated during therapy sessions; it is further demonstrated by the substantial growth in his communication, motor skills, and physical aptitude. Ethan is learning to communicate non-verbally; increased his fine motor skills through sensory play; and improved movement of dormant muscles while engaging in physical activities.

This terrific team of therapist’, including Daryn, Alysia, and Missy interactions with Ethan and unmatched work ethic has really highlighted parts of his personality that his delays would have otherwise contested. Ethan loves music and books and is a huge fan of Eric Carle’s “Brown Bear, “and “From Head to Toe.” Ethan looks forward to every session, and applies everything he has learned. These inevitable encounters with the family at Houston Easter Seals are paving the way to Ethan’s greatest triumphs and this truly is a very exciting chapter in Ethan’s extraordinary story. 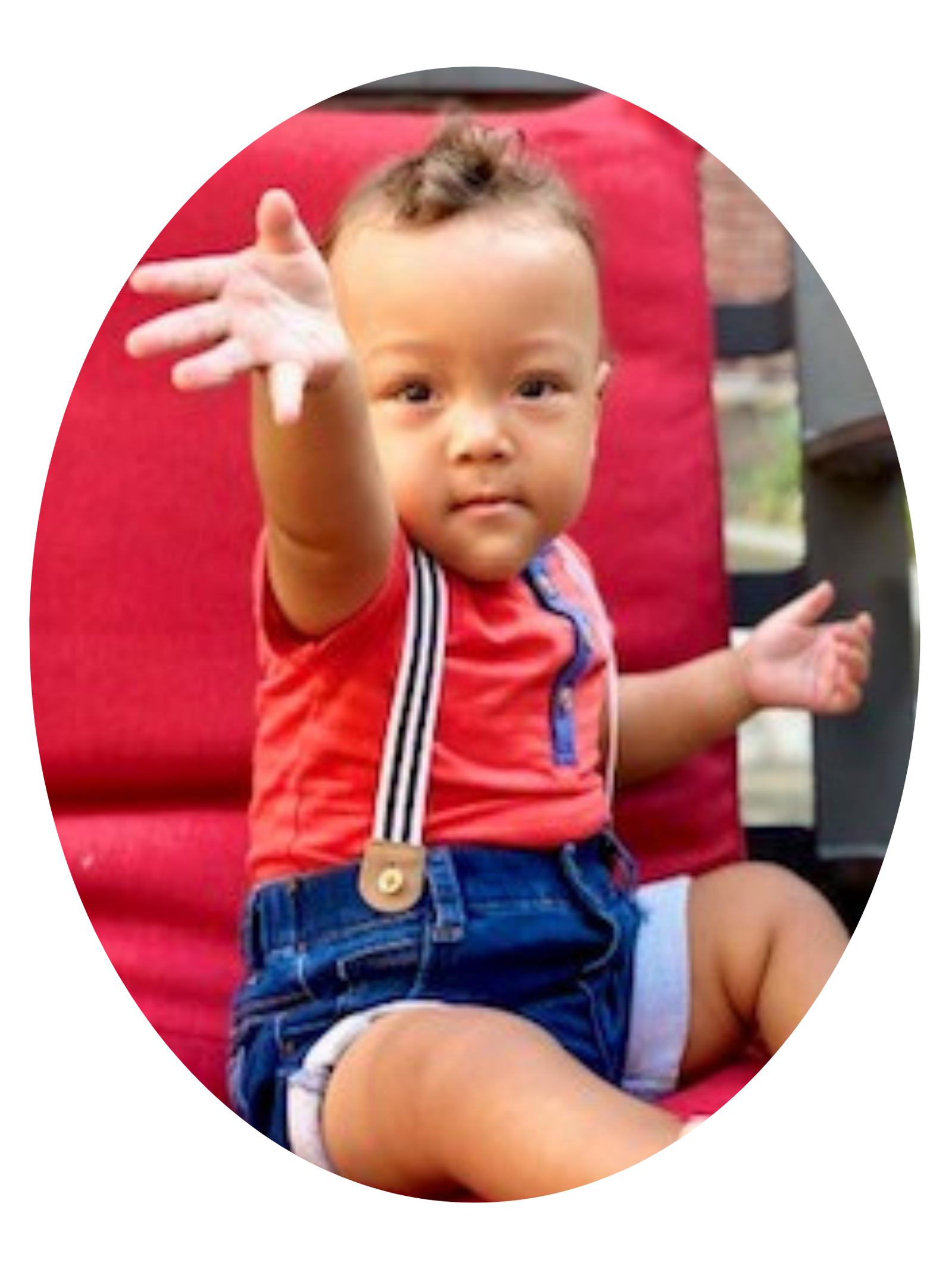 Rilind’s journey in this world was destined to be extraordinary before he ever took his first unassisted breath. Yes, unassisted but we will get back to that. Two weeks before his birth, a routine pregnancy checkup yielded shockingly somber news. Rilind would most likely be born premature and there was even a greater risk of him not making it at all. As would any parents be, we were heart broken. Having not had any issues with our first-born son, this was completely unexpected. Understanding the risk, we opted to have a surgical procedure to increase the chances of his survival and leave the rest in God’s hands. Following doctor’s orders, everything was going as expected until a Friday evening when his mother had to be hospitalized. Baby and mom remained stable until Monday. On that day, January 11th 2021, doctors ran out of options to save the pregnancy and the difficult decision to deliver him at only 22 weeks gestation was made. As they were rushing mom to the operating room, doctors and nurses were asking what baby’s name is going to be, but at that time we were not set on the name yet, as we thought that we had time to decide. He was born weighing 510 grams, unable to breathe on his own, eyes still fused shut, gelatinous red/purplish skin, without nails, eyebrows or eyelashes, and a faint heartbeat.  Neonatologists managed to resuscitate and intubate him and transfer him to an incubator in the advanced level IV NICU, which would be his home for the next 145 days. Knowing the daunting odds of survival for him we pushed forward preparing ourselves for all possible outcomes. So far, he was beating all the odds of survival, so we decided to name him Rilind.  In his mom’s native language of Albanian, Rilind means Re-birth, to Rise or Resurrection, which seemed fitting for this fierce tiny warrior.

The NICU journey was filled with days full of uncertainty and worry, seemingly endless medical assessments, and constant monitoring of his vitals, being told to take it only from “one hour at a time”, to “one day at a time” and eventually to “one week at a time”.  However, despite being intubated for 5 weeks, suffering brain hemorrhage, a heart defect (Patent ductus arteriosus), undergoing eye surgery, multiple blood transfusions, PICU lines, X-rays, daily blood tests among other procedures, his strength, perseverance and fighting spirit always kept us hopeful and never let us lose our Faith.  Slowly, one day at a time, he constantly improved with no major setbacks. Finally, on June 5th, 2021, we were able to bring our miracle baby boy home. Unfortunately, testing times did not end with the NICU discharge.  Since, he has been hospitalized several times with various viral infections and seizures, which led to his diagnosis of SCN1A genetic mutation that causes seizures. Even though at his tender age of one, he has faced more obstacles that any of us adults, he is thriving and slowly reaching milestones.

We truly owe a special thanks to the hospital staff who were just exceptional, as well as all the therapists and specialists who have been taking care of him after he came home. We look forward to the future and excited to see what he will achieve, while we continue to remain #RilindStrong. 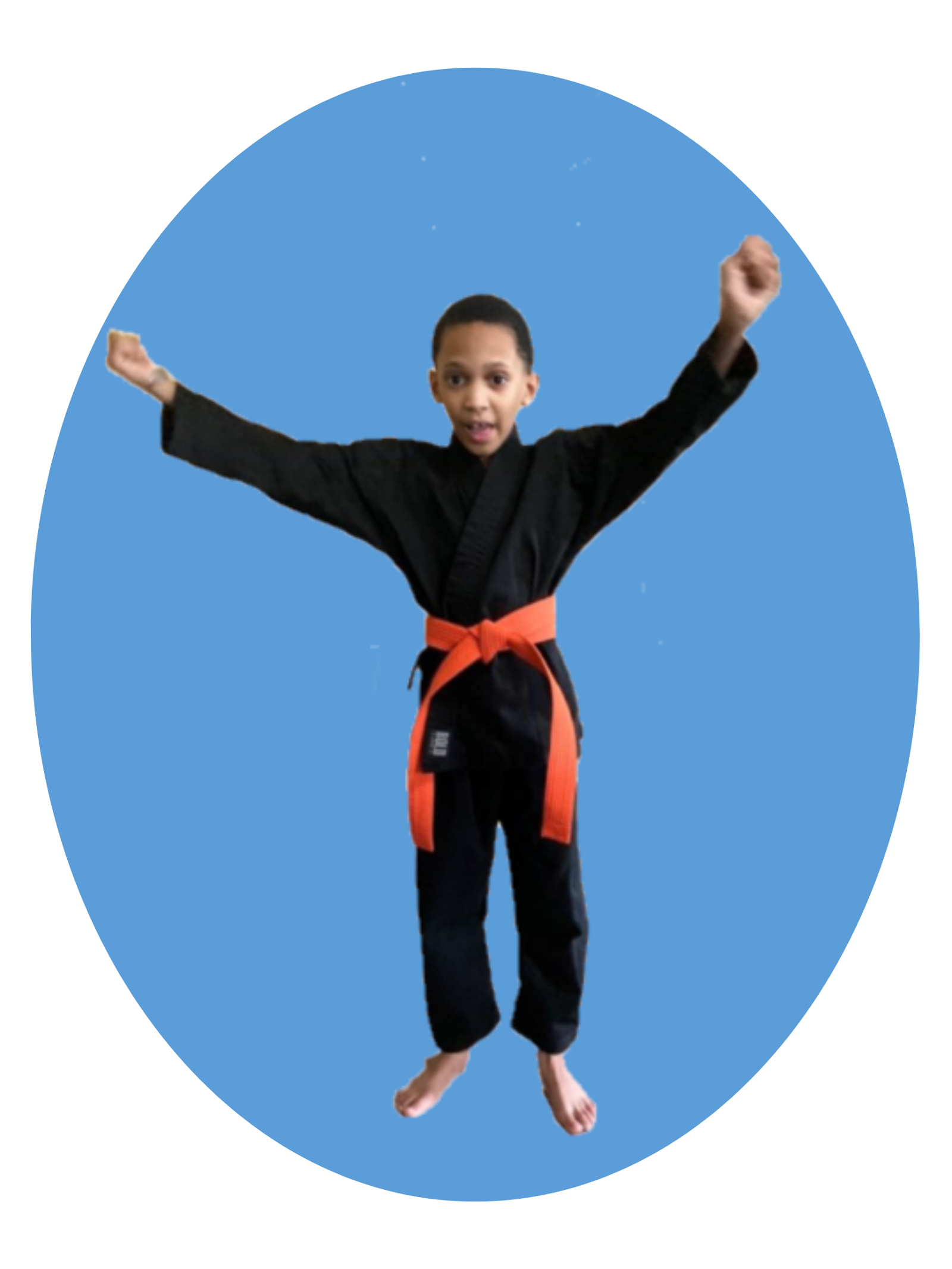 Ryan is 10 years old and in the 4th grade at the Westview School. His biological parents are both deceased. His paternal grandparents have taken care of him since he was two weeks old and adopted him at the age of 15 months.

When Ryan was about two years old, the grandparents notice that he was missing some developmental milestones. He was not saying any words, would point to items and made no eye contact and had a very short attention span.

At the age of 3, Ryan was diagnosed with autism spectrum disorder. He exhibited delayed speech, lack of self-care, poor fine motor, and gross motor skills.

Ryan received early childhood intervention soon after his autism diagnosis. When Ryan turned 4, we began researching autism playgroups for Ryan and connected with the Fort Bend Easter Seals autism playgroups. As Ryan got older, we began looking for karate classes and was referred to the Easter Seals Houston office. Our love affair with karate and the karate teachers, has enhanced Ryan’s life greatly. He has competed in numerous competitions and currently holds an orange belt in Karate. Ryan has participated in the Easter Seals Family Day out, Zoom summer camp, Little Rustler’s Rodeo, the Veterans Family Fun Day and Family Art Therapy. Ryan was able to complete his first walk on April 23, 2022 in the Easter Seals 5K Walk with his family.

Easter Seals has been a strong support and great resource for our family in keeping with Ryan in activities.